How to Stop Your Dog from Jumping

Home / How to Stop Your Dog from Jumping

“Tim and I can't thank Leah and staff enough for Dogs Unleashed. Our boys have been coming here over 3 years now the look on their faces when we pull up to the center is worth all of it!” 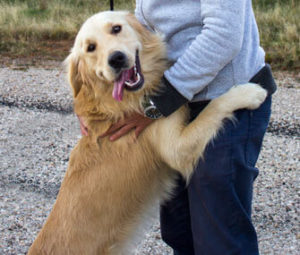 You love your dog unconditionally, but sometimes they respond with undesirable habits, like jumping. Sometimes you tolerate it.  Sometimes it’s inappropriate so you say something but they still won’t stop which makes you very frustrated.  Now, if that last sentence didn’t bother you like some annoying grammar police on social media then you’ve just found the problem. The truth is, it’s always inappropriate for your dog to jump on you unless you “ask” them to. So now you have to ask yourself, “Am I asking my dog to jump on me?”

Dogs don’t speak our language but that doesn’t stop us from talking to them.  But when we speak, they don’t hear what we say, they hear what we mean. And since they don’t speak our language, they have to discern what we mean from more than just our words.  Dogs know what we mean by our tone, inflection, posture and body language. Beyond that (and this isn’t scientific) they “vibe” off of us.  Even if you say it, inflect it, posture and gesture it, if you don’t mean it, your dog won’t just do what you say. You can fool some of the people some of the time, but you can never fool your dog.

“So how do I say it and mean it? Doesn’t “mean” mean being mean?” Not at all. Dogs come from a completely different social structure than we are used to but they want to be a part of our world. Have you ever had a friend or a mate who came from a different background than you? It may be a different culture, class, education, career field or just different hobbies and interests than you.  Yet you still value their companionship enough to want to experience their world while being a good sport and not looking like a total idiot. That’s our dogs. They love us, value our companionship and want to be a part of our world. All they need to know are the rules and how to follow them. The #1 rule is consistency.

Most people who hate sports do so because they never learned the rules. When they do attempt to play, the revelations of new rules mid game are extremely frustrating because of inconsistency. If you jumping was allowed in the beginning, they think it’s a rule. When you call foul mid game, they don’t understand. It’s important to explain the rules from the beginning.

We have a new dog in our house. His name is Canoe. He’s a 145lb. Great Dane who’s sweet as can be but, with that kind of momentum, it’s important that he understand the rules of our house. Almost forgetting that there needed to be this laying down of rules (our other two dogs are 13 and 17 years-old and max out at 10lbs combined) it was easy to lavish love on this poor rescued creature and give him everything he’d been lacking. However, when issues arise with a dog this big, they are big issues! Jumping was the first one we had to address. 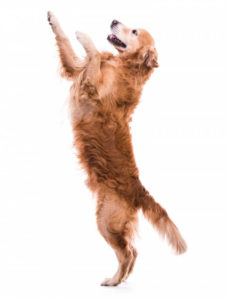 Just like when you are in a new situation, you learn what’s appropriate by feedback.  You judge the crowd by their response. If you tell a joke that falls flat, you don’t follow up with another.  Polite laughter or “praise” might encourage you to go on and eventually you could become the joke yourself. After an awkward silence, a good host will end that gap by moving the conversation along in a way that doesn’t call you out or embarrass you so you can get back to learning the rules of their world. As Canoe learns the ropes of our family, sometimes he exhibits behaviors outside the rules, like jumping. We do not reward this behavior with praise.  We turn our backs with body language he understands that makes the joke fall flat. After an awkward silence, we resume the conversation by turning toward him and praise good behavior as he exhibits it. Being consistent with this tells him that jumping is not allowed and he will no longer attempt it because that awkward silence does not feel like a part of our world he wants. Pushing, or any non-awkward-for-him touching, he will interpret as praise to continue the bad behavior.

“So what if I’ve established that jumping is not okay but sometimes it still happens out in public.” Your dog is more comfortable at home because you are more comfortable at home. There are less people to interact with and less rules to follow for you.  Out in public, there’s a totally different set of rules and even though you know them, there’s a change in your demeanor as you approach them.  This change is perceived by your dog as a new language.

Maybe you’ve been newly introduced to a friend’s culture that comes with a new language.  Even though your friend’s voice is familiar, their inflection is different. It’s easy to feel left out or to misinterpret the mood and respond at the wrong time in the wrong way. A good friend will remain consistent and make you feel included by translating for you in a language you understand. Be consistent with your dog and reaffirm to them that the rules still apply in this new environment by taking some time out to translate for them.

Other times, our dog’s reactions can reveal a lot about ourselves. If you take your dog into a social situation that’s uncomfortable for you, you’re going to throw off all kinds of mixed signals they won’t know how to interpret.  The situation might make you feel insecure and in need of reassurance.   What you might be “saying” to your dog is, “I need you as close to me as possible right now, to heck with all of the rules!” So, your dog complies by jumping. But, because you’re not uncomfortable, you don’t respond consistently. You don’t want to call them out on a bad joke so you figuratively laugh politely. You offer praise by pushing them down followed by petting them, to sooth your own self. Inside you are repeating, “please don’t jump, please don’t jump, please don’t jump.” but all they hear is “please jump” and “good dog for jumping.” You are in a sense, asking your dog to jump on you.

That’s a lot of psychology we can’t cover in-depth in this blog.

The best ways to stop your dog from jumping are to establish the rule at home by “meaning” what you say in a language your dog will understand.  Always, ALWAYS, reward good behavior. Be consistent with your rules and what you mean, no matter where you go.  And if you find yourself in an uncomfortable situation while with your dog, trust that they want to please you.  Be steadfast and continue with consistency.  This will lead to good behavior, worthy of praise which becomes a mutual reward for the both of you. Now you can pet your dog and both feel better.

“Tim and I can't thank Leah and staff enough for Sigs Unleashed. Our boys have been coming here over 3 years now the look on their faces when we pull up to the center is worth all of it!”